I upped on my already substantial Clarke position.

Clarke is a Canadian investment holding that specializes in buying distressed, underappreciated or under-utilized assets. They have a rather great track record, that is somewhat hidden in the Book Value CAGR due to regular special dividends.

In my book, I regard them as great capital allocators when it comes to spotting undervalued assets and monetizing on those assets with great rates of return.

After a 25% special dividend in the form of Terravest shares (50% on my initial buying price) and -I’m guessing- due to their investment in a basket of energy related stocks, there was a big sell-off.

Personally, I do not believe we have seen the depth of this crisis yet, but still I converted 5% of my portfolio from cash into additional Clarke shares at 6 a share.

Which makes it a 15% position for me (including de received Terravest “dividend” shares).

The thing with Clarke is, you have to live through it, side by side, to appreciate how great they are. It’s sometimes hard to see in retrospect, but it is easy to see when you are on the journey together. 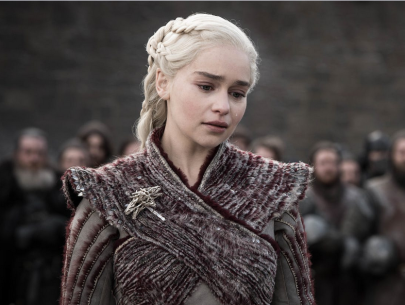 Emilia Clarke. Not that Clarke, you silly.

I first came to know about Clarke Inc through their ownership of Keck Seng Investments. Keck Seng is a real estate holding, out of Hong Kong, but with some real estate in the US.

I was researching Keck Seng during a classic Graham bargain hunt, with the added twist that opening a bridge to Macau would stimulate tourism and thus the occupancy rate of their hotels.

Back then, I decided Keck Seng was –although obviously cheap- out of my circle of competence and didn’t pull the trigger.

As an aside, Keck Seng recently announced results. They paid a dividend of 0.08 per share in 2019.

Equity was 4,37 billion HK$ back in December, including an impairment loss of 274 million HK$ on their New York Sofitel Hotel. Debt is covered by cash.

It is still cheap, it is still growing year by year, although modestly,.

But I am still not buying.

I bought Clarke instead.

Not so much as a sum-of-the-parts (although the math is favorable in that aspect as well), but as a matter of trust in their great capital allocation skills.

I think the Armoyan brothers (don’t know how much Simé is involved, since George is the “face” of the family) are at their best when there is blood on the street. Maybe some of the best around.

They are patient, conservative and disciplined. They only love a great bargain. And they like tangible assets.

This is my thought process : with a share price under 6, what are the chances that book value per share will be 18 in 2025?

I reckon that probability is rather high. And moreover: I reckon the chances of BVPS to be less than 6 in 2025 are close to zero.

During the 5 years following the Banking Crisis BVPS did triple and you received a cumulative bruto dividend of about 30% on the share price.

Also, they are great and disciplined at cannibalizing shares under book value… 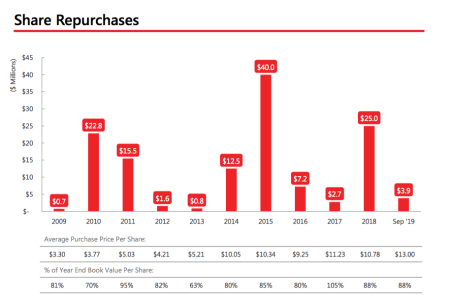 Plus: they are ramping up insider buys, as we speak. Brother Simé on the common stock, George on the Debentures. And their G2S2 private holding on both. (Maybe I’m counting double, I’m not sure)

Either way they are now holding over 53% of Clarke, up from 43% less then a year ago.

Moreover, they have currently a NCIB outsanding for 5% of the shares and 10% of the Debentures, but it would be “in character” if they expanded on that. 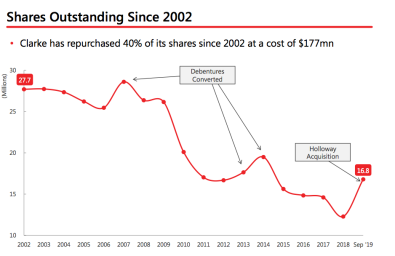 In the most recent filings they said to be expanding their share in Trican Well, way-way-way under book value.

Now, if –through buybacks, acquisitions and operations – they would only be able to grow Book Value for 20% a year in the coming 5 years, and thus double their book value – it still might be a triple at current prices.

Let’s do the math.

TO SUM IT ALL UP

Market Cap is now under 100 million.

What do you get for that?

Since then, they spun off their Terravest shares a as special dividend to shareholders – valued at the time at 5,99 per share.

Still included are the 18 hotels of fully owned Holloway.

Max Holloway. Not that Holloway, you silly.

You have to consider Holloway as a “hotel flipper”: they buy distressed hotels, do the redesign, run it a few years maybe and sell at a premium.

They also started a hotel management business under the Holloway brand, but that’s not material yet.

You also get your own ferry business, that is valued at 1.2 million.

In terms of securities hold, the main factor is Trican Well shares.

At year end they owned 34,961,900 shares of Trican and have since been a buyer. Off course Trican Well’s share price has evaporated since then and declined over 50%.

It now trades lower then 0.2 of book value, while –incidently- Clarke considers book value to be fair value for Trican.

Since I consider them great in allocating capital when there is a crisis, I assume they can compound BVPS at 20% a year in the coming 5 years.

When this materializes, you would be looking at 18 a share in 2025.

Now, not to predict that BVPS will actually be 18/share in 2025 – along the way there will be dividends and buybacks and all sort of (positive) shenanigans to reward shareholders along the way.

Putting their skin in the game.

A great conviction pick for me.